Combined Speed and Warbird Stunt.  The usual entrants turned up for speed except Murray as he was in S.A. Once again the weather did not look promising but turned out to be great for flying. I flew my Proto model NR .28 but it was a bit slow so I put it away. Harry was flying a Class 5 with NR.21 (what else) and had 3 consistent flights, it needs some prop compression sorting to go faster, he also flew the old OS Class one model for 3 more good flights. 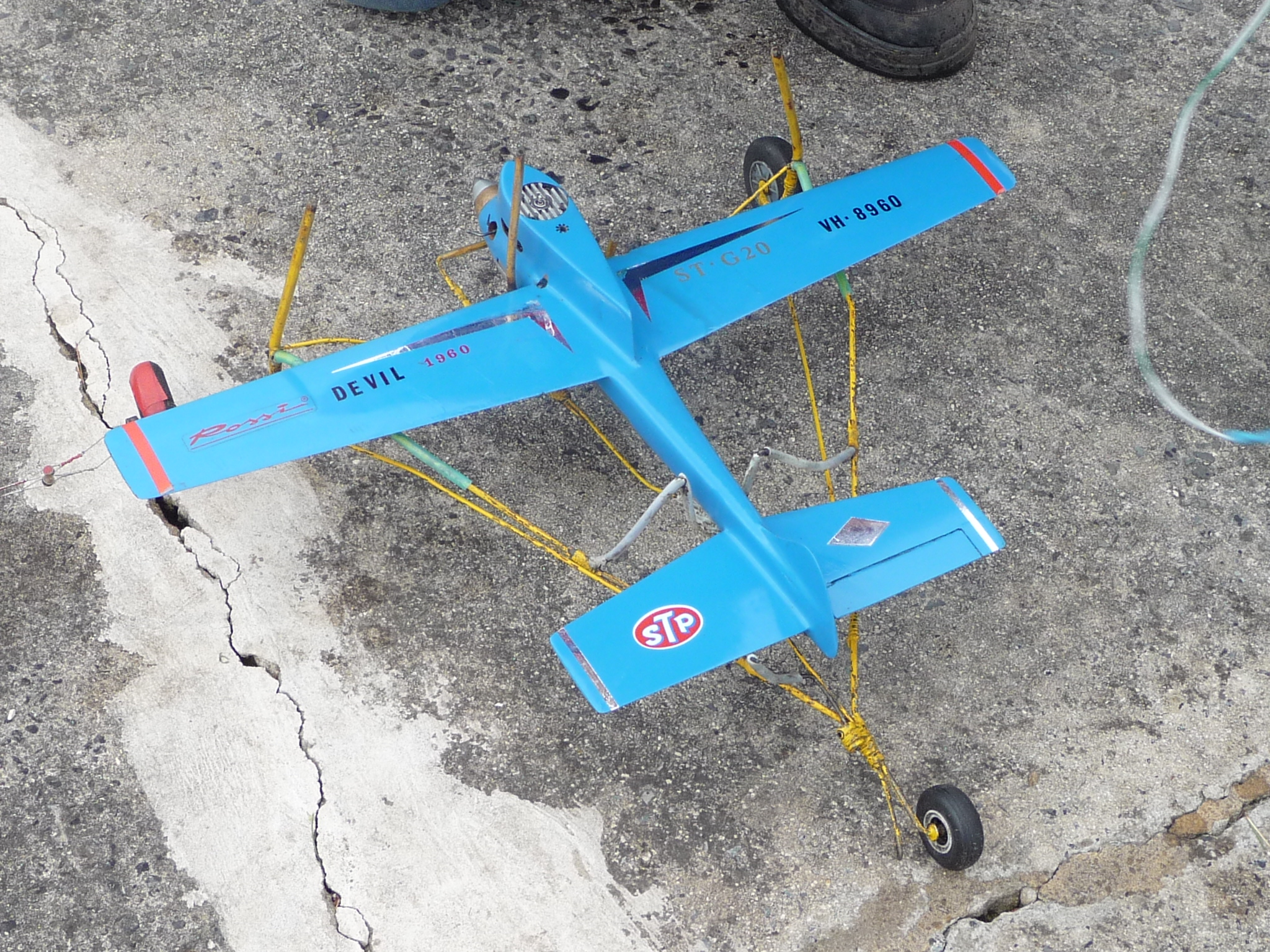 We had a new guy! fly speed, club presi-dent Paul. I set up my old Rossi “Devil” model with an Enya CX11, this is the en-gine that got me into Class 1 decades ago. He flew well for 3 reliable flights, having never flown out of a dolly before, just hope he goes onto something faster, a NR .12 in a modern model would be the go.

I also had a fly of my old Moki S12 FAI speed motor in my Irvine model. It runs well and sounds great. I tried to fly it at Albury in 2 rounds but had pipe seal prob-lems, then I had a go with my old 1996 Profi, it ran OK but a bit slower than Moki.
Mark and Harry flew FAI but Marks cut out after about 6 laps. Harry had to pull out of a fast run as he had hooked the handle pivot bar under the pylon “V” and the model was starting to pitch high and low.

Andrew flew his NR12 for another 3 flights and he is getting faster, hoping to break into the 17,s which he did the week later after mak-ing up another prop slightly bigger radius an a little more pitch he did high 17,s consistently. Ken flew a ½ A Proto with a Fora 1.5 diesel. It was OK once got tune correct, he also flew Simple Speed with an simple rat model pow-ered by a AP Hornet glow? Time to get the NR12 out Ken and challenge Andrew.

We hoped to fly “Perky” speed but only 2 models were available so we decided to fly that the following week but still only 2 models showed up so we decided to fly anyway. But! my K&B 15 broke a crankpin on the ground, so Andrew decided to fly his Fora instead of his very fast Parra but after a few flight it seized in the air, we are awaiting the post mortem. I have set up a model to give guys a fly of mono-line, originally it was a Two-Up but that met a tragic end. Next I tried an old Class 4 speed model that had a K&B 40, but that would be too fast for learners, so a HP40 was fitted with a few mods as well as a spring nose wheel off my old radio model. The motor had no compression, but who needs compression?

I test flew it OK so then Mark Ellins had a go as he once flew the Two-Up, he mastered it OK, then someone else tried and hit the ground twice and did a shaft run. It sounded great and the comp improved slightly. I have fixed the damage and the model is ready for next pupil, so if you want to have a go it is there.