Dick Perry discovered the Great Planes Combat Corsair ARF and concluded it’s scale fidelity was excellent for our purposes, within the required ±5%. With a wingspan of 43¼”, it sounded like it would be good for Class 2. Available through standard hobby channels for about $110. 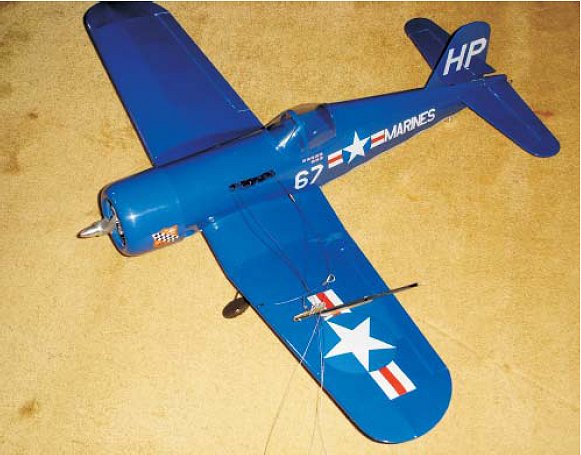 I got one and went to work. It is designed for .15-.25 glow engine, so we will be overloading it with electric hardware for Class 2.

The model is pretty straightforward to build for R/C, but several modifications for control line add to the required effort. The main modifications required are beefing up the fuse structure for the bellcrank and battery support platforms, adding landing gear (the model was intended for belly landings so no landing gear was included,) adding the tailskid and hook, and adding the line slider.

I chose the Kontronik Tango 45-06 motor,

and it is really a nice inrunner motor. Unfortunately, the price was high when I bought it and has gone up since then. There is a substitute to consider for the future, the Scorpion HK-4025-630

which, at $115, is a bout one third the present price of the Kontronik. The power specs are similar, and the Scorpion weighs an ounce more at 11.5 ounces. I also bought the Kontronik Jazz 55-10-32 speed controller

and that, too, has gone up in price. I have been using Castle Phoenix controllers in my electric Skyrays and have been very happy with them. http://www.castlecreations.com/

They will release in about four weeks their new series of ICE controllers with lots of new features, including an on-board data logger, on-board switching BEC (battery eliminator circuit,) and voltage capability for 8 LiPo batteries in series (referred to as 8s). I’m looking forward to this release and think this will be worth buying. There are lots of companies making motors, controllers, and batteries, and I am only listing what I think might be cost effective. I just can’t list all the good companies and good products here, but would be happy to pass on whatever I know. I had planned on using 10s batteries, but had the 8s setup so I’ll try using it. I think it will work fine. I paid $200-$250 for the batteries. They should be good for 50-100 flights. In Class 2, 50 flights cost me $200-$250 for 65% nitro fuel, so the batteries don’t sound so bad. And the good news is that, at Toledo this year, the cost of batteries continues to drop, and some brands sell similar battery setups for half what I paid only a year or so ago. So while Class 2 carrier is not a cheap event, the cost for the components for electric class 2 now are on a par or less than with the gas components, and the operating costs seem to be less for fuel and, of course, glow plugs. (Class 1, Skyray and Profile events are cheaper, of course. I’ll get to that.) It’s just the startup costs that look scary.

Anyway, let’s look at more technical details of the Corsair and applications for other classes. Most electric carrier models use the same three-line bellcrank system as the glow models. Instead of operating a carburettor arm, the throttle control is through a 50kohm potentiometer.

They have a similar model, 308NPC503-ND, which costs less and should have a longer lifetime, but I haven’t tested it. These pots are connected to a Utronics control unit, made by Clancy Arnold clancyarnold@juno.com and available for $15 each plus $3 shipping. It’s really simple and works very well.

The Corsair goes together according to the instructions with a few other things. The bellcrank has to be anchored solidly in the fuselage.

I added two 1/8 ply bulkheads to help tie the 1/8 ply bellcrank platform to the fuselage sides and distribute loads. You can also see the simple linkage to the control pot. 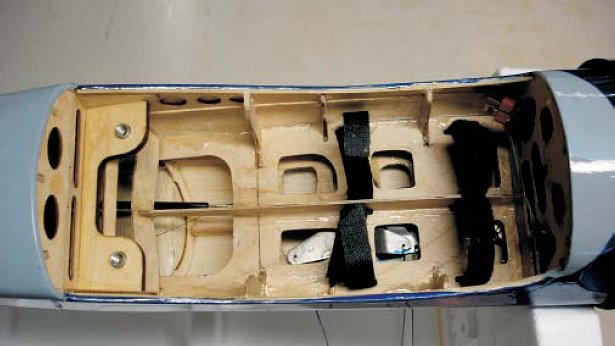 The tailskid/tailhook assembly is based on a plywood strip inserted into the fuse bottom and tied into three ply bulkhead that come in the model. 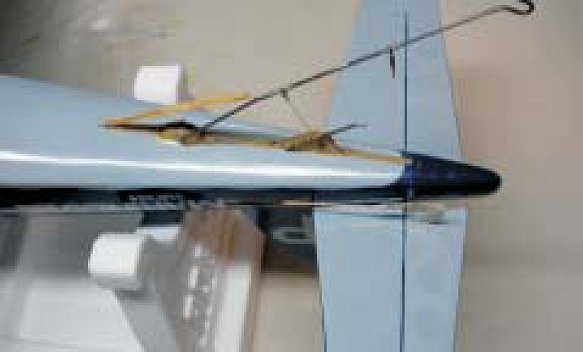 The motor is mounted with an aluminium commercial motor mount assembly. Hobby dealers and web stores should find a mount system for your chosen motor. I reinforced the firewall with a few pieces of plywood filler in the lightening holes that came on the back side of the laminated firewall so that blind nuts for holding the motor mounts would mount easily. 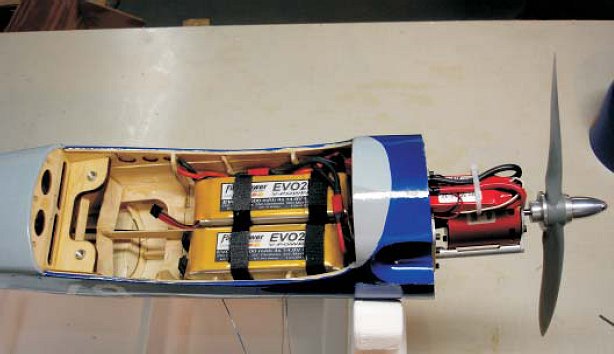 Motor mount with speed controller Velcro-ed to the motor mount.

It’s important to make the motor mount as rigid as possible. Sometimes I have encountered severe vibration, even with a balanced prop. The solution has been either to make the motor mount more rigid or to reduce the moment of inertia of the rotating parts by, for example, replacing a heavy plastic prop with a lighter wood one or a lightweight plastic electric prop. 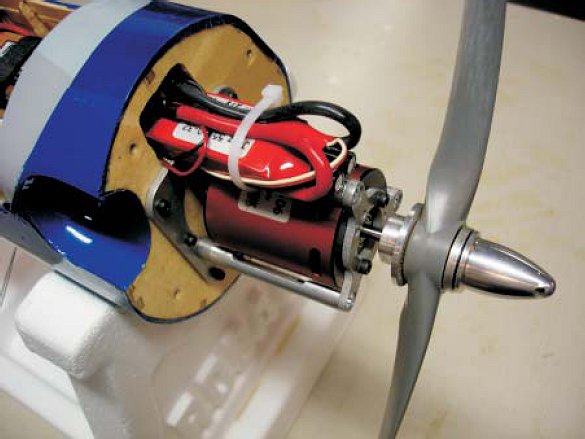 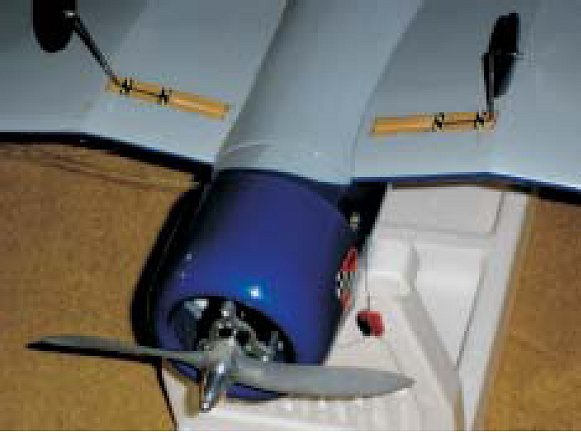 You can add your own line slider arrangement as you see fit.

I used plywood “hinges” on the ailerons to lock them in place. I’ll cover the gaps with Monokote later.

The Corsair balance point for R/C is given in the instructions, but we may need something different. When the weather warms up a bit, I can get in some test flights and let you know what I learn. There’s always a lot to learn, and I hope to have it sorted out for the busy contest season ahead.