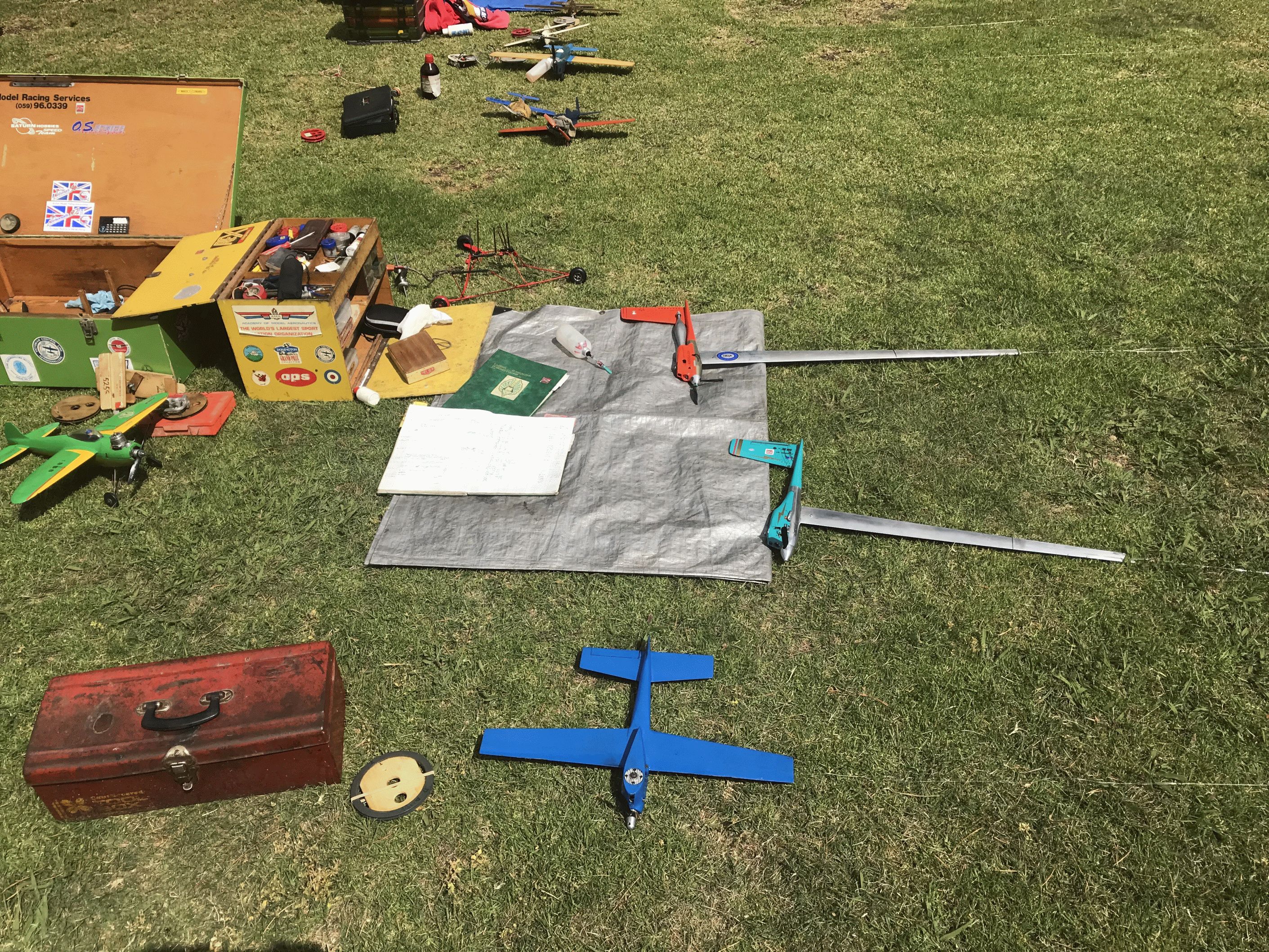 Andrew has his going better now due to an engine rebuild, just a bit short on laps, but since fixed due to a room added to the tank.
Mark Ellins flew his rebuilt OS CZ11 PS with a new P&L, the old one only lasted 22 years!!!! It was first used in my Class 1 for the Nationals in England, and later in his Mini Good-year. He has been flying on different fuel and lines to get Pylon practice for his entry into FAI class , but as he has now graduated, proven by his flying in FAI and doing good times, so it has been suggested that his time not count, but his name appears
in results as he flew, I believe if you fly your name should appear somewhere.

Murray flew his Profi FAI but only got one flight as others flamed out for some reason after about 7 laps. I flew in FAI using my MOKI 12 S piped speed model in the old Irvine model. Engine is 1980’s vintage, like the Hungari-an team used. Ken tried his Novarossi 12 model but props are too big and engine still too tight, so put one of mine on (which is too small, but should get a flight), however model problems occurred. He managed some good ½ A Proto flights as did Harry, who also flew his Class 1 in the OS!! Class as well as his Proto model with rebuilt NR .21, P&L was getting a little tired after nearly 25+ years winning Class 2 T/R many times as well as Open Rat and Proto, not bad for a $170 motor. We were going to fly Perky but only Andrew and I had models and you need 3 so you can get and average, and closest to average wins, not fastest time, how-ever bragging rights go to FTD.

He then flew it in a Perky worldwide postal comp, managed to set some good times, event finished on Thursday 15th. I believe that the winner from USA was using a Novarossi 15 and f/g prop, I don’t think this is exactly what Perky should be??Perkys are nose heavy anyway, but fly superbly. With a Novarossi the C/G must be around the prop driver area, Andrew Nugent uses a Parra 15D which was retired from his Classic FAI TR, he converted it to glow and goes very fast, my Fora glow is heaps slower. This model has also suffered from marginal laps so it has a room extension on the tank now. Keith Baddock flew his Aeroflyte “Fury” Vintage A T/R as well for fun videoing it as he flew in pylon. It is powered by a Frog 250 diesel 1950, I remember flying this in Vintage T/R at Moorabbin in the 1980’s for him, and we thought this was what VT/R was all about. [wrong!!] Once again he turned up and flew so we put him down as an entry to encourage entrants.

Thanks again to our Chief Timekeeper Ron Savage and helpers as well as Fiona Wilson and Andrew Nugent for the hamburgers with “the lot” for lunch. Warbird Stunt was also flown along with Vintage [carnage] Combat, we also had a contest-ant from S.A in Greg “Taipan” Nelson. It was good to see all events listed on the Calendar for the day flown.
Report by Robin Hiern.

Sandwiched between the speed flying and Vintage Combat, five contestants put their Warbirds models through the Classic Stunt pattern. Paul was the solitary judge and although he had a model available he elected not to fly. Ken Maier was the only competitor to fly two rounds. He flew a Spitfire powered by an Elfin 2.5 diesel. On his first flight the en-gine stopped after the clover leaf and he landed inverted. His second flight scored better points but he failed to do the clover leaf. Non the less he improved on his first score by seven points. Murray Wilson flew his electric powered “Lavochkin” for the day’s highest score of 112 points. Mark Ellins had his P40/ST46 work-ing well to take second place.

Another ST 46 powered model “Mustang” was flown by Andrew Nugent and his 101 points claimed him third place.
Final place went to Harry Bailey flying a well aged Carl Goldberg P40/OS35S. This model is ra-ther heavy and does not posses any flaps and combined with Harry’s limited stunt flying skills a resultant 73 points was attained.