Main file is the clause by clause changes that we (Vic) compiled from mostly Graeme’s notes.

Other files are two replacement sections and two new sections.

Two new sections – for Classic FAI T/R (from Andrew with some changes as suggested by Maris) and Vintage Combat (from Maris collated from various including us / Harry).

Summary of all changes:

Remove “Builder of model” requirement for Speed to open up proxy entries
Add safety rules for electric models
Replace Speed section with content from supporting document (updated to include increasing the line diameter for Class 1 to 0.4mm)
Change linkages to FAI F2 (T/R, combat) rules to fix them to those in effect as at January 2012.

Posted in News | Comments Off on Proposed Rule Changes

Speed, Burford A Team Race, Classic Stunt. Burford A Vintage Team Racing is restricted to the use of Gordon Burford “Taipan” 2.5cc engines. Only two heats were raced with the three teams opting not to fly a final 160 lap race.

Some close racing with very little difference in the rotational speeds. Robin Hiern and Ken Hunting had a race at each end of the lines.

The Bailey/Roberts team had the fastest time of the day but only just in front of Wilson/Ellins by .07 of a second.

The Speed boys took the opportunity to do back-to-back testing of various line diameters pending a proposed rule change. Classic Stunt was postponed due to windy and dusty conditions.

2 people suggested that we also go longer to 58 foot,i think that May slow them down too much ,especially the lower   OS/ENYA/CS/ASP/? ENGINES IN LIGHT AIRFRAMES .

Testing yesterday at our speed comp under contest conditions was, as expected ,using my no 2 novarossi 12 which has done high 13,s for 10. First flight as original was 14 .33 sec  251kph ,next flight was on the .4mm wire, needle the Same ,i just dialled back the pitch with my pitch change washer ,by 1/16 th inch pitch take of as normal and did 15.66secs  229 kph,therefore it slowed 1.33sec& 22 kph.at that speed was easy for anyone to keep up, even us old farts.

It looks like it will go through I had only one negative from one who would benefit from this change ,ah well??!! D’ont know when ,keep posted. My suggestion only that for the interam that for models that are slower than say 16.5 for 10 laps open for debate the times,can still use .3mm wire once they achieve that time they MUST update.

Only 2 flew speed yesterday ,weather was ok a bit of dust from the motobikes next door ,i flew my class 5 that did not go at the nats ,back to its old self. Also managed to get my .21 proto semi sorted, thanks to Terry’s help. Noel had 2 flights with his NR .12, in the 16+sec ,did not fly OS class 2 model? Main thing was doing the back to back testing for the line change. I sometimes wonder why i put the work in to fly with 1 or 2,maybe i should just go down on my own and test for my own satisfaction.

Next comp is VIC STATE CHAMPS,sat FAI and hard surface COMBINED SPEED, then grass long line models at 1PM after team race on the usual front circle at Knox on Sunday. 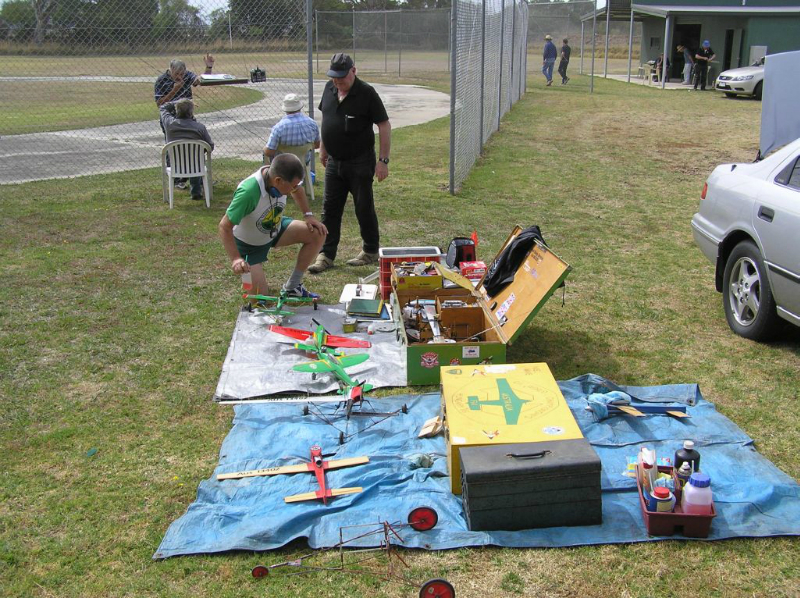