Speed & Vintage Combat  The weather forecast did not look good wind and rain, just as it has been for about 4 weeks, I cannot remember so many days of high winds. 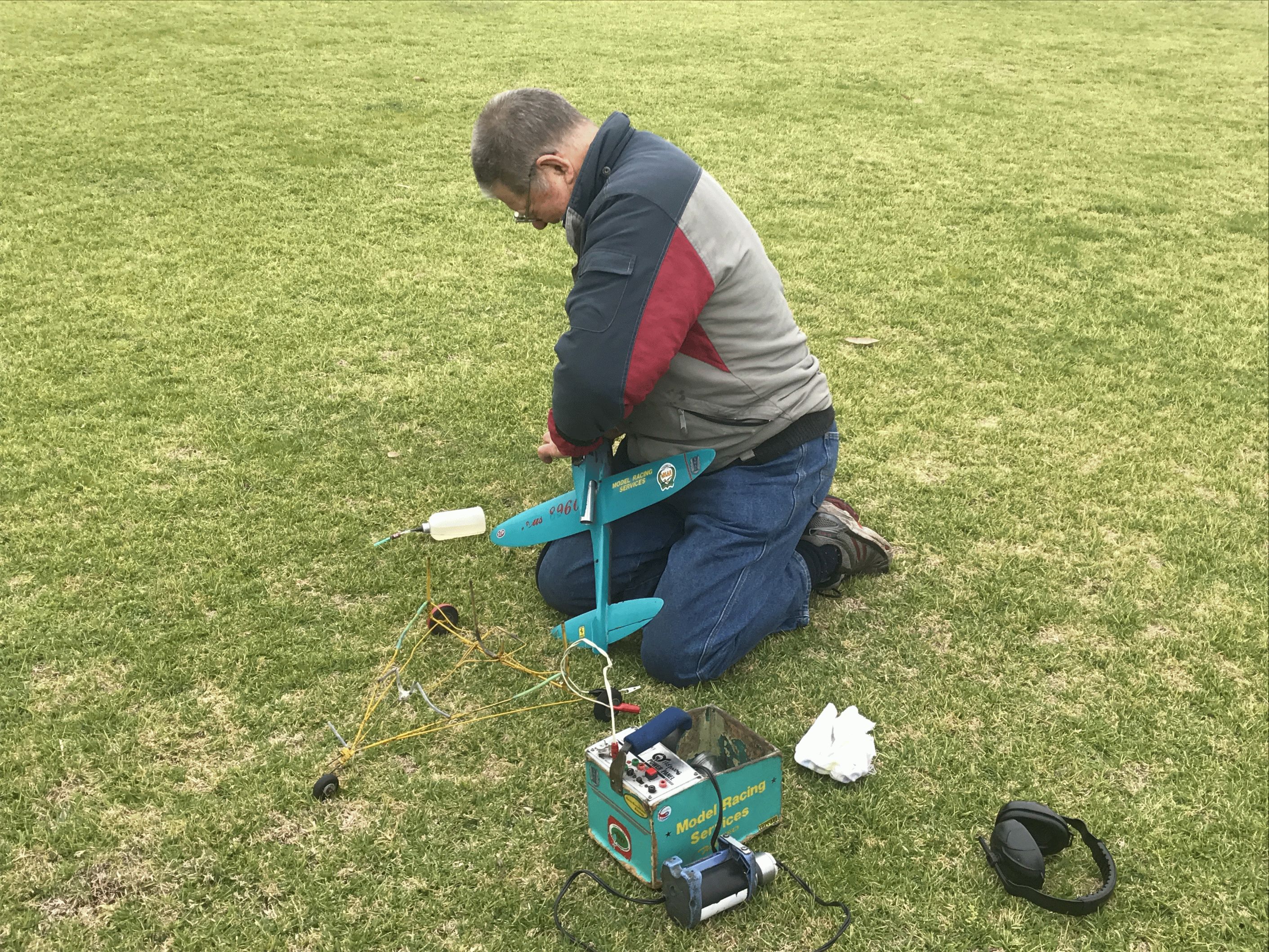 Once again we were lucky with the weather despite the forecast, only light wind and mild temperatures. We managed to set 2 more benchmark records on the new 10% nitro fuel rules. Class 4 [.40] and Class 2 [.29]. Only needs someone to set a Class 3 [.60] time and we will have a complete set, in time before the next Nats at West Wyalong, which will make it a level playing field, does not worry me as I won’t be there.

Murray had done some testing of his Nelson .29 model the week previous, he has had to find a lower Pitch prop for his piped motor for 10% nitro, he ended up using a SHERLOCK single blade that Stuart made for my .21 model years ago. I was going to try my [Dud] Dub Jett 40 in place of my ST X40, but it did not run right as the piston kept expanding. So instead, I fitted up another old piston and liner from all the worn out X40 bits to make a good fit and ran it in, managed to do 2 good flights slightly faster than I did in February.

We had 3 in the OS !!!??? Class1 category, Mark used smaller lines and different fuel again as he wants to get Pylon practice for the next faster class????he is entering. Harry B and Ken H flew their ½ A Proto models. Ron Lacey had his first speed flight with Murrays old ST G21-29 a 2 line model. Welcome to the club. We needed to push the comp along a bit as it is not fair to have our volunteer time-keepers sitting around waiting as they are not even club members.

The other planned event for the day was Vintage Combat and Nathan Baddock and Les Spaltman had some model testing flights whilst the Combined Speed was in progress. At the conclusion of the Speed contest we had our customary BBQ lunch and chin wagging session before getting Vintage Combat underway.

A few of our regular combateers did not turn up (probably because the weather forecast was not very promising) but the five that were in attendance took advantage of the pleasant fly-ing conditions that prevailed throughout the afternoon. The ground conditions were favoura-ble for combat, none of the gritty dust that was encountered at the West Wyalong Nationals and soft but not boggy earth. A draw was made and because of the odd num-ber of entrants Harry Bailey got a bye in the first round and then flew twice in round 2.

First up in Rd 1 was Mark Ellins V Les Spaltman. Mark had 2 seconds more airtime than Les and the cut count was two for Mark, one for Les. Next up was junior member Nathan Baddock ably assisted by father Keith (mechanic) up against Murray Wilson. No cuts in this bout and Murray’s 240 points for airtime was greater than Nathan’s 78 points.

Les Spaltman had a bout that he enjoyed with Harry Bailey in Rd 2. One cut each but Harry had more air time.
Murray V Mark was next and carnage ensued. Win for Mark. Murray’s Parra ended up with bent engine lugs but the engine continued to perform well when it was grafted into a different model. In Nathan’s next bout he got a cut on Harry but spent a lot of time on the ground. Harry won by a margin of 7 points.
Only three remaining in the contest now so it was a battle for podium positions. Murray V Harry produced four cuts for Murray against Harry’s two cuts with a slight airtime advantage for Mur-ray.

Mark flew against Harry and then Murray and lost on both occasions so now the final bout to de-cide the winner would be Murray and Harry. Last time these two met in a final decider was in Wyhalla and on that occasion Harry’s “Warlord” had it’s lines cut and the model did a fly-away so Murray was the winner. On this occasion the roles were reversed, Murrays model landed within the flying site boundary and Harry obtained a cherished victory.