Speed  & Vintage A Team Race. Murray had his FAI speed model up on the pace to record a couple of fast flights. 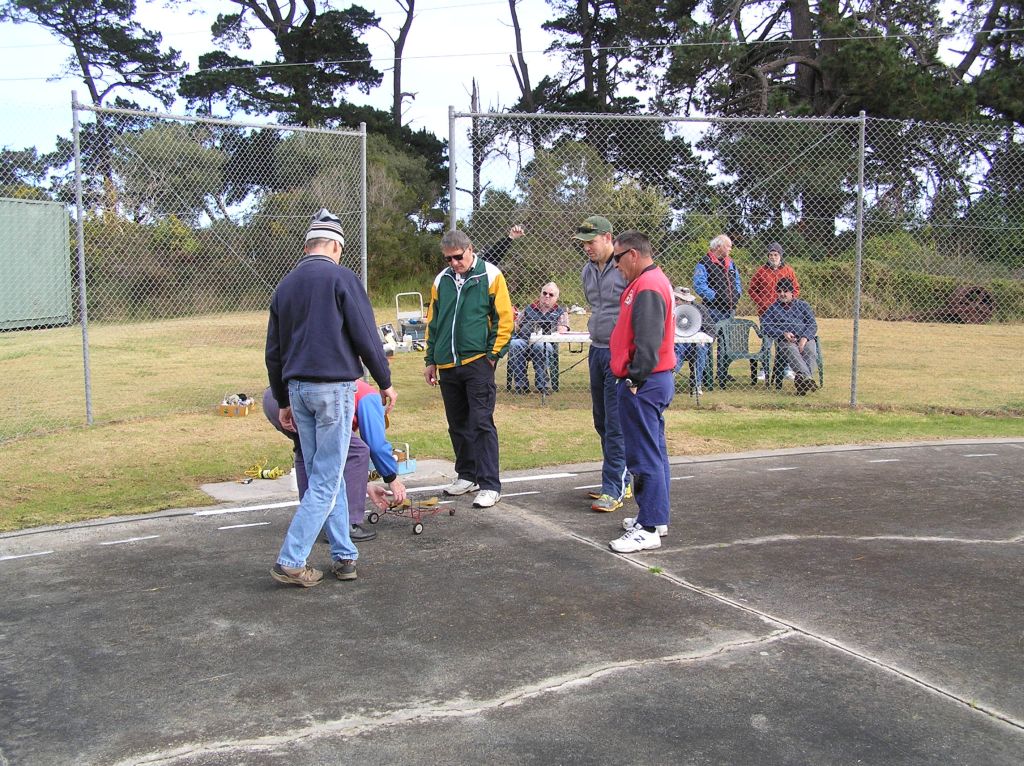 The three Class 1 models did not have much of a margin between them but Andrew Nugent managed to break through the 18 second barrier to claim the bragging rights for the day. Noels Vintage Proto model only managed one flight but the engine gave out before completing the distance. Judging from the lack of compression there might have been a hole in the top of the piston. It was good to see Vern Marquet make an appearance at the field.

We also had an overseas visitor at the field. Brian McFail was on holiday from Arizona and called in to watch the proceedings and have a chat.

The average Perky time was 43.92. The closest time to the average was the 44.28 set by Andrew Nugent which gave him the winners honours.

The Vintage A Team Race that was re-scheduled from the Vic State Champs only attracted three entries so it was decided to go straight into a final race to be flown over the concrete surface. As it turned out, that was a decision that Har-ry Bailey and his “K31” model came to regret because grass can be more forgiv-ing.

Wilson/Baker took a few practice tanks to get a race setting on the R250 in Neils “Olympian” but were eventually good to go. Mark had fitted a (tuned) Parra T3 in his “Dimpled Dumpling” and was giving the com-bination its first race outing. The engine had previously been used in a Classic FAI model but was yet to be tested for Vintage A.

All three models were quickly in the air at the start of the race and were circulating at a steady even pace. At the first pit stop it was evident that the Bailey/Roberts “K31” was getting a little more range than the other two models and was marginally quicker in airspeed. After the second pit stop the “K31” slowed off a little with a lean setting and gained some extra range. At the next stop Peter opened the needle a little and the speed returned and it was looking that a first place was on the cards for Harry and Peter but on lap 153 the outboard wing folded upwards and the model took a dive into the concrete with a resultant total write off for the model. Wilson/Baker took the winners honours with a time of 7:09.34.