F2A & Combined Speed, Stunt, F2C, Classic FAI & Vintage A Team Race, 27 Goodyear, Goodyear, Vintage Combat. Fabulous weather greeted competitors for the inaugural CLAMF 2017 International C/L Champions Cup 4 day event at CLAMF Aerosports. Some parts of Australia were in the grip of some really hot weather but in Victoria we were fortunate to avoid the big heat and our contests were carried out under blue skies and moderate winds.

Thursday the 26th was Australia Day and by lunchtime most of our interstate visitors had arrived and had been practising with their models. The first event of the afternoon was F2C team race. It is interesting to note that none of the four teams entered had both team members from the same state of Australia and the teams were grateful to have the opportunity to get some serious racing up against top class opposition. Some very respectable race times were recorded by all entrants. Leknys/Reichardt almost failed to post a time after three failed pit stops in a row but managed a clean run at their last attempt. 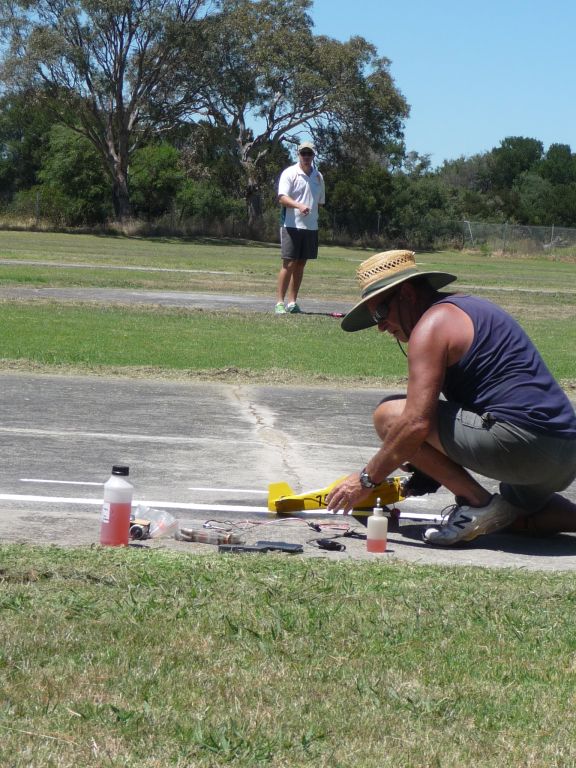 A point of interest is that Fitzgerald /Ellins used the model that they displayed at the recent Word Championships in Perth. As a noise reduction measure, this model has a shroud fitted around the engine exhaust. On the evidence from this contest, the model is no slower than a similar model without the shroud, engine performance did not seem to have any detrimental characteristics and the modelsounded noticeably quieter than all the other models in the contest. Wilson/Poschkens again showed that they can be consistent and are capable of producing some very fast race times.

Following on after Rounds 1 & 2 of F2C on Thursday was Classic FAI Team Race. The event was run using the proposed rule chang-es. This meant that Oliver replicas had 15cc of fuel Parras 10cc and Nelsons 7cc and a restricted venturi size. Paul practised with his “Espadon” but the engine threw a propeller during flight and Paul withdrew. Paul thought he had fitted a Graupner 7×7 to his Parra but it turned out to be a similar looking Master Airscrew and it was obviously not up to the job in hand. Wil-son/Poschkens had some needle valve problems and Leknys/Ellins had a run in on take off in the first heat. Cameron/Fitzgerald had a smooth run in the final with very quick pit stops. Justic/Lacey needed to do an additional pit stop to complete the race to gain second position.

The large grass circle at Frankston is in lovely condition. It was put to good use by a small Classic Stunt group that included returnee Derek Pickard. It was Derek’s first contest since picking up a control line handle again and he was happy that he was able to complete the pattern without getting dizzy. Gavan Opperman had the misfortune of re-kitting his model. Thanks go to the contest judge, Peter Robert

Four different model designs were involved in some close Vintage A team racing that was flown over grass. Paul was up to his usual quick start pitting standard to post quickest time of the day. Some very close times were recorded during the heats on 27 Diesel Goodyear. The Owen brothers did a model line change before a race but must have neglected to check the controls. A resultant wing over into the concrete made a mess of the model and R250 engine. There were no recorded speeding infringements.

The final race in Goodyear was won by the last man standing. Wilson/Ellins kept blowing plugs and the supply finally ran out and the tank valve on the Justic/Owen model stopped holding the tank pressure. The F2A contest only had three entries Murray Wilson managed to record a time for each of his four flights.

Robert Fitzgerald was Mark Poschkens’ proxy pilot. It took a few flights before they man-aged to record a time and the model had a tendency not to groove in a level flight. The flight in round 4 was suffering this problem but the required laps were completed but as the handle was removed from the pylon and the shutoff operated, the situation got worse and the model had a high speed contact with the concrete which ended its flying capabilities. Richard only managed to record one.

The Combined Speed contest was scheduled to follow F2A. Robin had brought along a selection of models and was going to be using the 10% nitro fuel that has been proposed in the rule changes in some of them. As the contest was about to start Robin received a phone call which resulted in him having to make an early departure. Harry, Noel and Murray had a few flights.

Vintage Combat was flown on Saturday following Vintage A and 27 Goodyear T/R. There was a varied mix of models and engines. Keith Baddock used an O.S. 15 glow. Murray Wilson won all his bouts to claim the number one position. There was a fly off between Robert Owen and Tony Caselli to decide second and third place. Robert had to borrow a model off Ken Maier for the fly off.