Classic FAI Team Race. A bit of news on the Classic FAI scene. Today at the CLAMF field we had a test session for our old classic models. I had prepared an old Dennis Prior model, saved from under Tony Cincottas house after he passed away. This particular model was flown by Dennis and Theo Georgiadis at the Dutch World Champs in 1976. The fact that it was built for a Bugl engine interested me as Neil Baker had in his vast engine collection a Replica Bugl engine made by Profi. 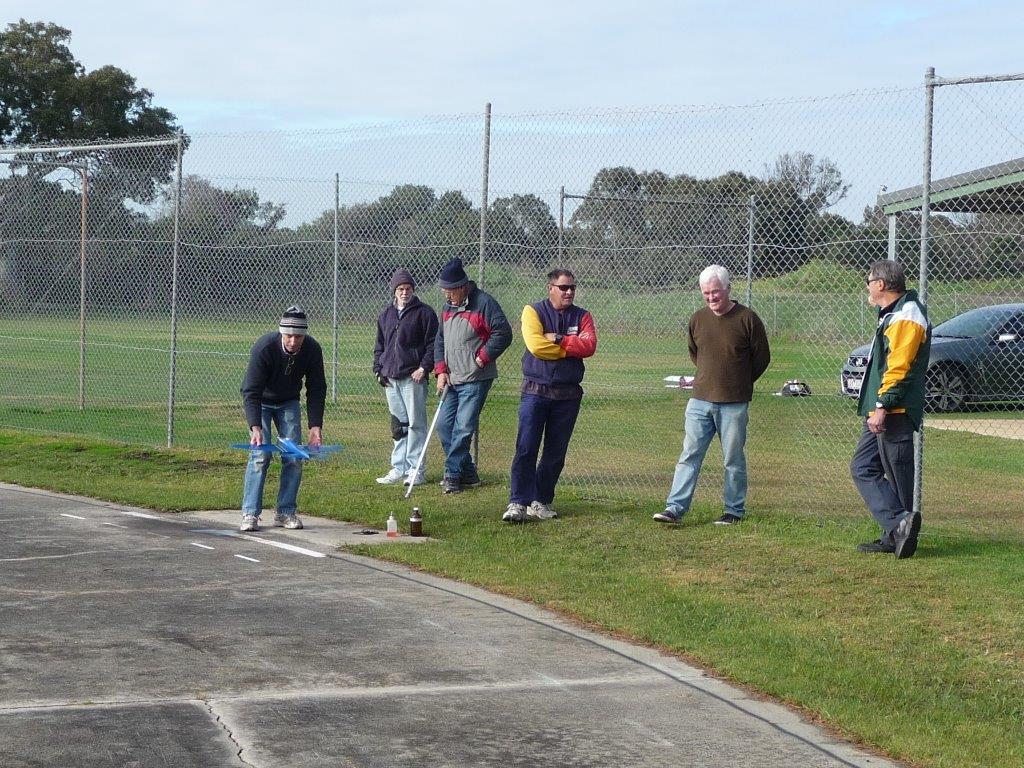 I received the engine from Neil and prepared it to fly. We flew it twice prior to this week and I had made some subtle changes each time, cleaning up the shape of the P/L and improving the setup of the drum valve induction system. Thanks to Ron Lacey for making the special mounting tool for the drum valve. Each time the drum is removed it must be remounted into the engine with the special tool to centralize it in the crankcase. Initially, some improvement was made but unfortunately this engine was not a good performer.

I had never wanted to flog this engine but it was nice to see a Bugl engine in the air again. Particularly in an old original model from that era. I am now rebuilding the front of that model to fit a Nelson T/R engine.

Thanks Neil for the opportunity to run this engine. It will now be cleaned up and mounted in a Bugl style wooden box that these engines originally came in.

Also on the day we ran a couple old Nelson engines.

Neil ran his “Classic Nobby/Nelson” model beautifully built and recently repaired by Ray Harvey. After a few prop changes and adjustments, Neil had it running well with myself on the handle. This was an ABC engine. The lack of engine vibration compared with the Parra engines that we use was very noticeable.

Next up was Mark (W/C) and myself with Ron Wilson’s 1978 W/C model. Powered by a Nelson Steel fitted with a new piston made by Robin Hiern. This engine continues to improve at about 23 for 10 for 35 laps. Robin took it home to make some subtle changes to the piston shape.

Using the same model we then ran an engine of mine with a piston made by Alan Barnes of New Zealand. Alan would be wrapped to know that we are still running one of his engines. It went well at about 21.8 for 35 laps on 7cc of fuel. This is an AAC engine and we were running a smaller venturi than I used to. This was to conform to the new rules proposal that should be mentioned elsewhere in this issue.

Well it was a great days flying considering a chilly Melbourne winters day.

Thanks to everyone for coming,