Speed & Navy Carrier. Perfect weather for our speed comp, little wind and 20 degrees. It has been 4 months since we had a comp, unfortunately there was a low entry, most of whom were in Perky.

As the new line size for Class 1[2cc] has gone through we wanted to set a benchmark – 100% record before the Nats so the challenge is equal for all the other classes, if not someone could turn up in Class 1 and do say 80mph well below the true potential of the class and that would be become 100% therefore the other classes would have to do over 100% in their class to win. I managed to set a benchmark at 14.906 seconds / 241.51kph, which is a good speed.

Murray tried to get some flights in FAI with his Profi but was the model was not working, he had a flight going in the pylon but the engine cut, welcome to FAI Murray [frustration aeromodelling international]

I got my old Class 5 model out to try and get the record back, which it did doing better than I had hoped at 13.43seconds / 268.06kph, it is now time to pension the old model off as it is around 10 Years old. It was the first Class 5 [.21] built and the pan is cracking so I have had a magnesium pan cast for it as well as for a new model called a “Kansas-Twister” which I test flew after the comp with a slow engine, it is a bit lighter than the old model as it has a the Magnesium pan I got cast.

My Proto model was not working, but I got it going after comp. Speed regular Noel Wake was not there as I believe he has health problems so that was one less competitor. The rest of the entrants flew Perky’s, Paul Stein ended up winning closest to average time and Andrew Nugent was the top speed, which is not important except for bragging rights/fun.

Vern was back again with a couple of Perky’s but neither seemed to work because of fuel feed problems. One was powered by a Fox 15 and the other I believe by a Cox 15. We have a comp at Knox on grass on the 29th of Sept so please drag out a model and join us for some fun. 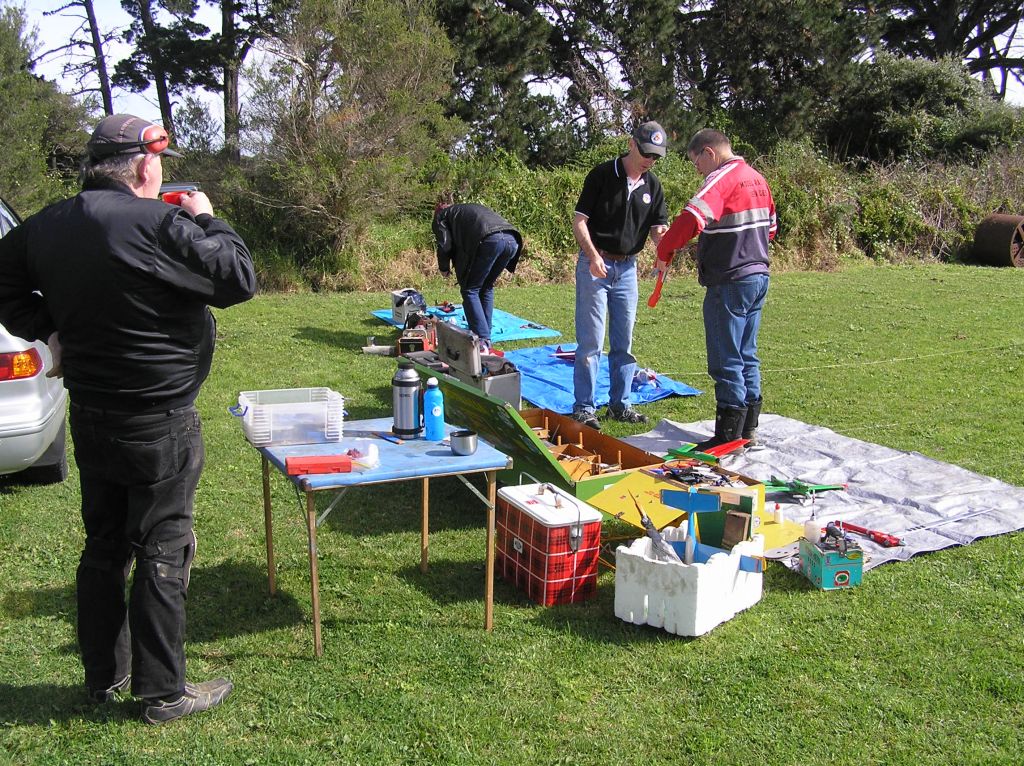 Some decent weather with a light wind gave us the opportunity to get the deck out for a bit of Carrier flying. It’s been a while since we last had a competition, but with only four flyable models available this time, it turned into a bit of a fun fly rather than a serious comp. As usual Graeme with his old and much repaired Bearcat showed how a reliable engine run and low flat landing approach makes getting on the deck look easy! Paul had a few problems getting on the deck and left a few calling cards to show where he’d been, same with me!

It’s now six years since we built the deck and apart from some superficial dings and scrapes it’s required no repairs and has worked as well as we’d hoped it would. Hopefully we’ll have a few more models repaired and back in action next time.