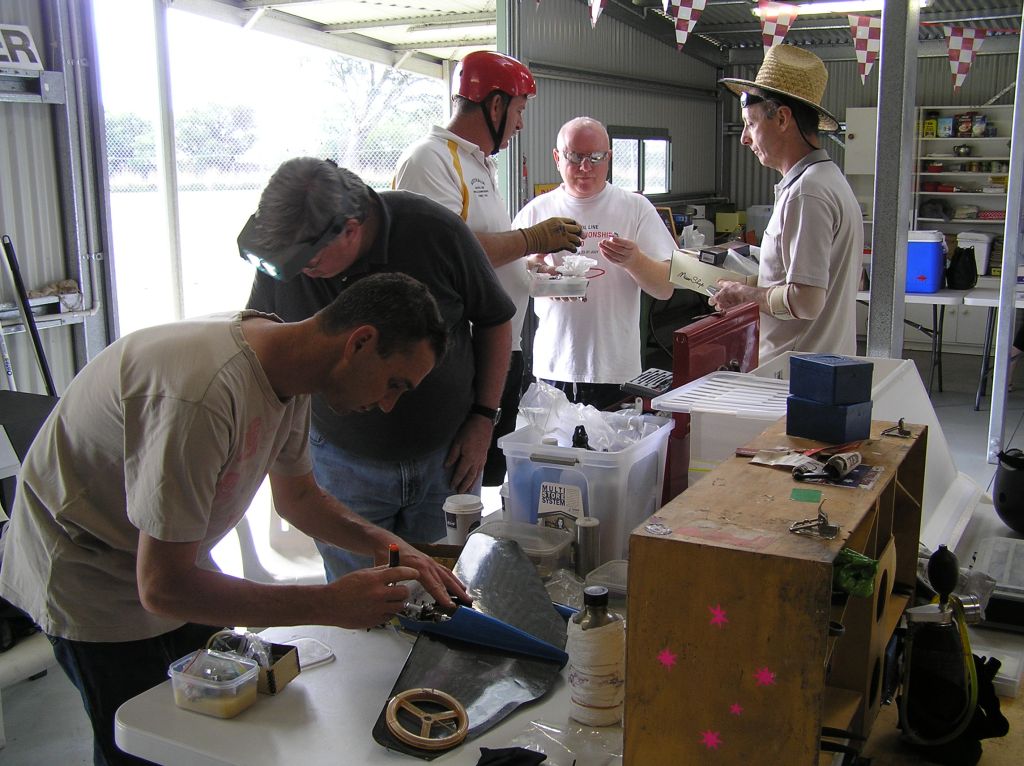 Vintage A & Classic B T/R at the 2013 Victorian State Champs.

Super Sunday was, in reality, Soggy Sunday.  The light rain was persistent all morning and it was well into early afternoon before the weather cleared.   The racing was soon underway with C.D. Keith Baddock marshalling the troops and getting them organized to make up for lost time.

Vintage A was first away and most of the nine teams entered took advantage of the traditional 5 minutes practice to fine tune settings before the first round. With just one or two exceptions, the bulk of the reasonable times were around the 3.30 mark.  There was no doubt the air was slow this Easter as a check of last years much faster Vintage A times certainly raises the eyebrows!

The first heat was really close with the Cosmic Rays crossing the line first in 3.29.40 with a margin of just over one second from Hallowell/Nugent on 3.30.63.  John and Andrew’s second round time was two seconds slower instead of two seconds faster which would have put them in contention for a finals berth..

Jim and Colin’s second round time was a second slower, so they missed out on the final by about half a second!  Life can be a bitch…  and wait until you read what happened later in Classic B!

Grant Potter was flying for Julian Reichardt but the gear wasn’t working as it should for this highly regarded NSW team and the result was a couple of times in the 3.50’s.  My bet is that they had very little, if any, practice before this event.  Ken Hunting and Andy Kerr also were down on time spent flying but after a slow first round, they got their act together in round two when a 3.38 was written down beside their names in CD Keith Baddock’s score sheet.

Nobby Baker and Murray Wilson were having some issues with landings but their superior airspeed made sure of a spot in the final.   All the way from Queensland, Trent McDermott was fortunate to acquire the pitting services of F2C whiz Mark Ellins. Their very quick Dimpled Dumpling posted a FTD 3.17.62 in round one to qualify first for the big rumble.

Paul Stein and Rob Fitzgerald were their usual efficient selves. They really revel in getting the job done. So it was no surprise when they lifted their game in the second round to post a 3.24.47, which was very good for the heavy conditions.

West Australians Steve Walton and Trevor Letchford had  gear issues and got nowhere near their potential.  The same can be said for the 2012 Victorian State Champs Vintage A winners, Harry Bailey and Peter Roberts. Last year these two recorded a smoking 3.17 heat!  Not this time.

Now for the final.  All were away smartly and everyone was going fast.  It was always going to be close and any mishaps along the way were bound to be costly.  The bouncy Knox grass is always a test. Two of the three pilots and one pitman contested the final of last years F2C World Championship.  As is usual, to win a Vintage A final down under, you have to beat some of the world’s best team race competitors.

In the end, it was Murray and Nobby crossing the line first for yet another well deserved win in this highly competitive event. Rob and Paul were just over 4 seconds behind with Trent and Mark a further 9 seconds back.  All competitors used the fabulous R250 diesel engine.  What a great pity you can’t buy one any more. The good news is we can get to do it all again next year.

Classic B was next, although there was a long delay for the start as Vintage Combat had to be completed first.   Classic B is renowned for the super close times it produces and this State Championship was no exception.  The entry list was a lot less than normal and was made even thinner when Ken Hunting pulled out at the last moment.  After a few tuning flights, the competition got underway.

The first heat was a cracker with Trent and Mark failing to go under 3 minutes by…wait for it… one hundredth of a second!   Richard and Paul were just over a lap behind on 3.03.34 with Harry and Peter not far behind on 3.10.36.

Last years winners John and Murray were hoping for a repeat performance.   A sticky filler valve put paid to their chances in round one, so the pressure was on for round two.  With Andrew Nugent doing a top job on battery, they rose to the occasion with a FTD 2.58.03 giving them first choice for the 140 lap final.

Harry Bailey and Peter Roberts were slightly off their normal pace with the Irvine/Galaxie combination.  They can usually go sub three minutes but today, they were at least 10 seconds away from that, with a best of 3.09.10

As usual, Richard Justic and Paul Stein find a way to make the final…. This time, it was much to the chagrin of the Cosmics Rays, Colin & Jim.  It was 3.03.34 for Richard & Paul and 3.03.41 for Jim & Colin.  That’s a mere 7/100th of one second!!  Thinking back, just how could they have made their time a fraction quicker?  Probably a dozen things would come to mind.  Guess that’s why we keep coming back to try again and somehow perform the race a little better.

The final was expected to be keenly fought and very tight.  However, there was disappointment at the start when Paul and Richard failed to take to the air with what was later said to be a plug failure in the Irvine 25.  This left last years winning Streak and the Dalesman V to battle it out for line honors.  Modified OS FX 25’s were screaming loud in both racers, but it was the Rob Carroll modded one in the Dalesman that was clearly faster.

It was always going to be close, but in the end, it was Queenslander Trent McDermott’s Dalesman, expertly pitted by Mark Ellins with John Taylor on battery, that brought home the bacon by a little over 3 seconds from John, Murray and Andrew.  Well done to the winners. Bring on the next Classic B event!