Speed  The weather forecast did not look good wind and rain, just as it has been for about 4 weeks, I cannot remember so many days of high winds. I got there about 9 am to check weather at field as it is often good at field but not elsewhere, also guys from a distance away could ring me in case comp was off. However weather was good all day a bit of a breeze and warm, ideal to fly speed. Comp did not get of till a late start, maybe they thought it was off.

The usual guys turned up, unfortunately Andrew Nugent could not take part as had to work again. I wanted to update the Class 1 record again as I had gone faster than at the Nat’s, I had 2 flights with Novarossi 12, both were within 2/100 sec of each other.The time of 15.56 is under old record of 16.02. My model is now being processed for a record claim. 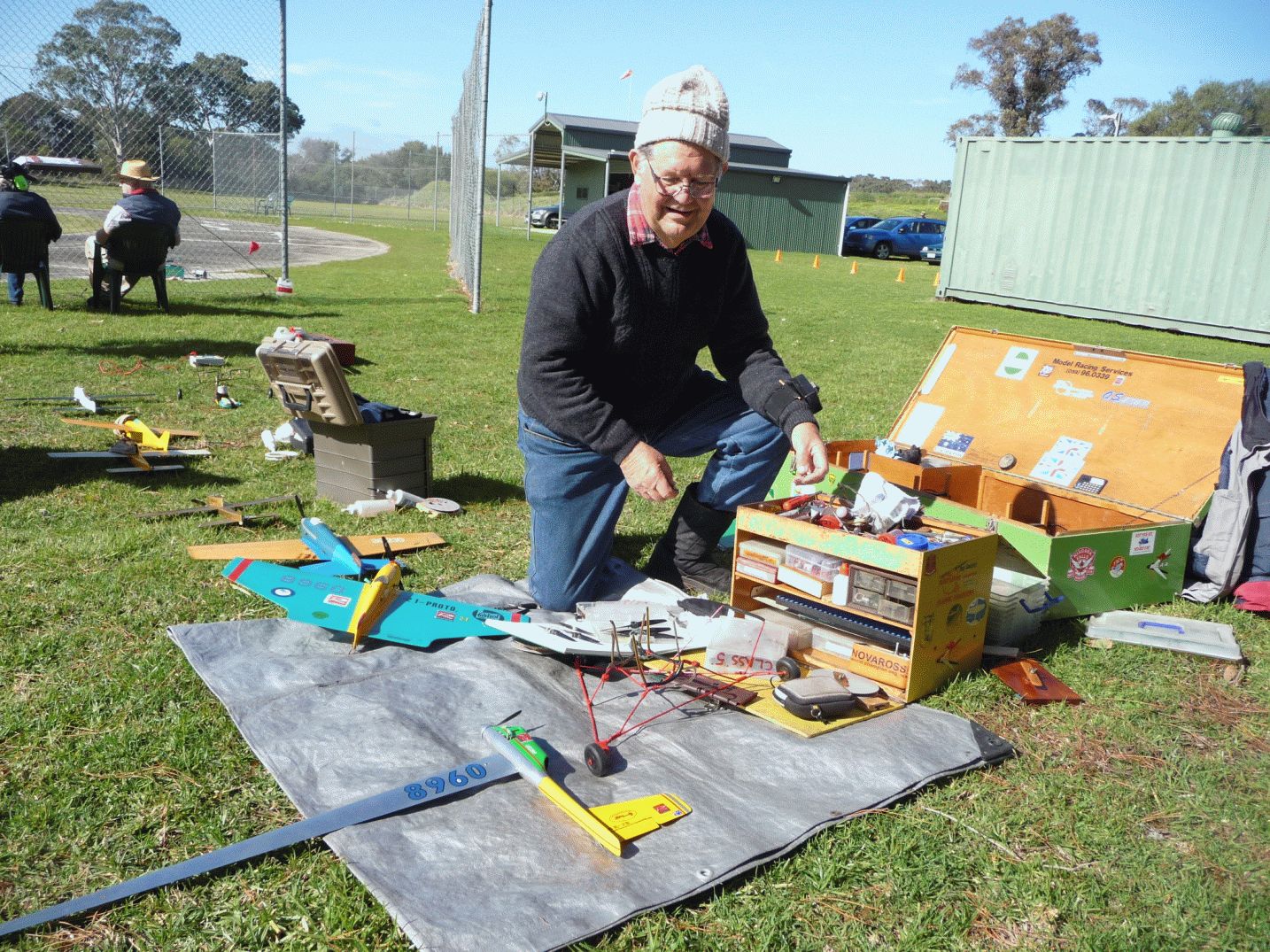 There were a few other Class 1 models, Harry had his OS CZ11PS model, 3 good times, Mark had his but used the old lines as he is using it to practice in the py-lon for some other FASTER class? Ken had his NR 12 model but did not fly, he flew a 1/2 Proto with a CS 09 diesel and his Midge/PAW as well.

Harry flew his old Class 2/Proto model after I rebuilt P&L as it was worn out at Nat’s. The old P&L only lasted 20 + years. They don’t make them like they used to!!!, this motor is bargain basement model I built for him for Waikerie Nat’s, it holds the Class 2 T/R record and has won most Class 2 events that it has en-tered as well as a few Open Rat events as a tortoise and hare, just so reliable, well it was until it wore out!

Murray flew his old G21/29 ST 2 line Class 2 model, for 3 consistent flights, Time to get the Nelson sorted out to set a proper rec-ord before the next Nat’s at WW? next year, someone should attempt to set a Class 3 and Class 4 record.
If a full set of records of records are not available for comparison it could be a sham at the Nationals, it won’t affect me as I won’t be there. I did attempt to set a Class 4 record earlier this year, but got one flight and the old ST X 40 broke again and I have now run out of bits.

I need a stronger motor. I am shoe-horning an old DUB JETT motor in to see if it will work. Our next comp is in September 9th, this weekend’s comp was rescheduled from the comp from July which was blown /rained out. I hope the weather improves to be better than it has been lately.

Thanks to our regular timekeeper Ron Savage and Phil Wake, joined by Neil Baker this time, thanks guys. Unfortunately 27 Goodyear and Carrier Deck was not run.
Robin Hiern.