Classic Stunt, Speed, Team Racing & Combat. It’s not often a 4 day competition is blessed with near perfect flying conditions throughout especially given the C/L Grand Prix location was in Melbourne. A good attendance across all the flying disciplines made for some great team racing, combat and stunt flying. 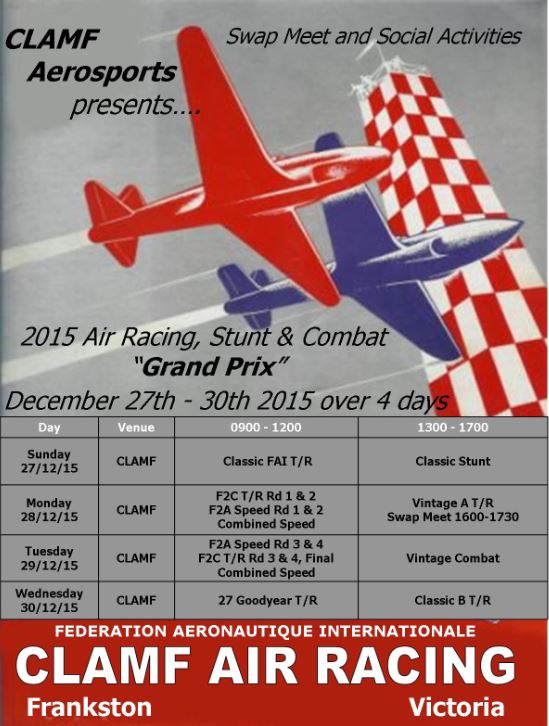 The Frankston Clubs decision to hold another Grand Prix competition during the Christmas holiday period was met with a favourable response from local and inter-state competitors. The Australian F2 team representatives in speed and Team Race at this year’s World Championships to be held in Perth during May all came along to get some time in the circle in a competitive atmosphere.

There were no complaints regarding the weather conditions and all contests were able to be completed without any unforeseen hold-ups. In the evenings there were social gatherings and various visits to local eateries were organised for the attendees.

The events started in the morning on Sunday 27th with Classic FAI Team Racing. Murray Wilson and Mark Poschkens set the fastest time of the day in heat 1 and elected to sit it out in heat 2. Poschy also teamed up as a pilot with Neil Baker at the oily end of the lines and gained some much needed piloting skills.

In the final race, Ken Hunting piloted Pauls “Espadon” to yet another Classic FAI win. Nugent/Ellins used a R250 engine and a 15cc fuel tank and were the only team not to be using a Parra or Fora engine.

Neil Baker brought his Paul Bugl replica engine for people to look at but he could not be tempted to consider having it tested in a model.
Monday morning action took place on the concrete circle. With three World class F2C teams in attendance there were expectations of some good racing and fast times.

The full Australian F2A World Championships team had also arrived hoping for some fast flights. Both of the F2 contests flew two rounds each then packed away their equipment and prepared for the next day’s rounds and the F2C final.

Combined Speed flyers took control of the pylon and a broad selection of models and engines were put through their paces. No records were threatened on the day. The top three percentage speeds were very close. Robin Hiern took the top two places with Noel Wake not very far behind him for third place.

Some experienced (and some not so) Classic Stunt flyers took to the air on Sunday afternoon. Colin Collyer flew well for some-body that has not been through the stunt pattern for some years. Only casualty of the day was when Andrews Nobler was caught in a sudden downdraft whilst flying inverted and the tailplane and cockpit were removed from his model.

Andrew and David Nugent teamed up to give Andrews newly created Dimpled Dumpling with a re-furbished R250 its first race outing. In the final race they narrowly outpaced the “Olympian” of Wilson/Baker to claim first place. Ken and Ron had some gremlins to deal with during the race but battled on to finish third.

Tuesday morning saw the return of the international F2 classes to the concrete circle for the concluding heats, rounds and final. Overseas visitors Bas and son Charlie from the U.K. were in attendance and were treated to some excellent team racing that culminated in the three teams that will represent Australia in Perth having a great final race to the finish. Fitzgerald/Ellins had a new model on show with a race setting that performed exceptionally well throughout the event and were the worthy winners. Murray and Mark were using older equipment but recorded very respectable times. The Potter/Harvey performances improved throughout the contest and they were only 3 seconds adrift of Wilson/Poschkens as the 200 laps were completed.

Only five competitors took part in Vintage Combat but we all enjoyed ourselves. Thanks go to the cut judges for making it all possible.

Last event of the meeting was 27 Goodyear. As usual there was a variety of engines that were used but it all made for some close racing and important communication between the pilots and pitmen. Only one heat was flown as the finalists were not hard to determine.

Thanks go to all the time keepers , CD’s , Judges and the ladies who provided the catering during the four day’s. If there are no Nationals at this time next year, we might get to do it all again.

Reports by the Harry Bailey